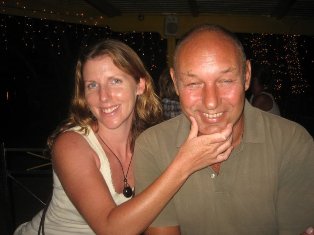 We met whilst sailing with the Sail Training Association, which is now "The Tall Ship Youth Trust".  Sim was Chief Engineer and I was a volunteer crew.  Sim, originally from North Yorkshire, England is a Marine Engineer by trade, which is quite handy on board our little boat. He has been sailing his whole life from his mid teens.  He first learnt to sail on a Mirror dinghy and eventually progressed to Hobie Cats, he raced competitively in both British and European championships on a Hobie 17.  Having worked on oil tankers as an engineer he took a break from the seafaring life spending a period working in the motor trade and property development before going back to sea with the Sail Training Association as Cheif Engineer.  The STA owned and operated the 150ft Camper Nicholson design, 3 masted schooners; The  Sir Winston Churchill and The Malcom Miller. And then latterly the 200ft brigs, The Stavros S Niarchos and The Prince William.  During this time he also owned a Hurley 22 down in Falmouth, Cornwall, where he was living at the time. Sim is an RYA Yachtmaster (off shore) and advanced powerboat coxswain.
I am from Wimbledon on the outskirts of London and worked as a manager for a lovely independant Lettings Agency (real estate) near Richmond also a London suburb.  I didn't start to sail until I met Sim on the Tallships. I  joined a sailing club near where I was living in Surbiton and learnt to sail enterprises not very well. I did however win a cup for enthusiasm! I took my RYA Competant Crew and Day skipper theory. I arrived aboard Alianna as a newbie and have learnt to sail under the calm and steady tutition of Sim. It has been a HUGE learning curve for me and I loved (almost) every minute of it.

We have been living aboard now full time for 12 years. Tying the nautical knot in Grenada in 2009.  We have completed the Caribbean loop and settled into cruising the East Caribbean for a few years.  We changed boat which give us a new impetus to continue  a life that we loved but had lost its sparkle. (who can blame us - a decade of full time cruising is not all fun and gamers and cocktails in the sun). We had many good years of Alianna. But the time came for change,  initially we thought that we would like a catarmaran but as it transpired we have come full circle and turned back to a monohull.  A steel boat was not what we were looking for.  But she ticked most of the boxes and here we are. We have spent the last two years sailing between America and the Bahamas but are now heading back to the East Caribbean. For further updates on our adventures keep following our blogs. 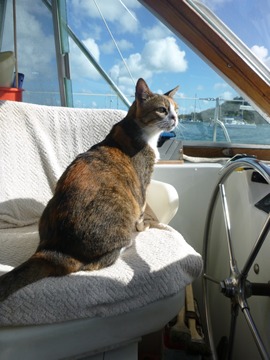 Ali joined us as a tiny weeny kitten that we adopted in 2005.  She is a valued member of crew and although she doesn't always pull her weight she is an invaluable source of comfort and often very entertaining! She is fondly referred (by others) as Evil Ali but desite the deceiving appearance she is a big softy at heart.