Port Washington To THE Hamptons

When the weather wasn't looking favourable for us to start our migrate south instead we pointed Wandering Star towards the infamous Hamptons on Long Island, stopping at Port Jefferson along the way. The sail there was fabulous - one of those 'to be rememebred sails' - full sails, calm seas and a balmy wind. Port Jefferson is a busy ferry port connecting Bridgeport and Connecticut but also a fairly affluent and touristy waterside town. I liked it there. We anchored in a bay behind a spit of land just to the right of the channel as you come in. The holding was excellent with thick sticky mud clinging to the anchor chain.

We had a fabulous walk around the waters edge to the tip of the peninsula so different from our Caribbean beach walks. The beach filled with slippershells and Horseshoe crabs and reedy grass waving in the breeze. The only sad sight, a dead deer washed up on the shore, oh Dear! It was such a crisp beautiful day and so peaceful surrounded by the rolling hillside and large properties.
The following day was dreary so we moved Wandering Star slightly closer to town, anchoring just outside the channel and tied our dinghy up at Danfords marina in between rain squalls. The town itself is cute - full of ice cream parlours and coffee shops. I'm sure it would have been glorious on a sunny day but it wasn't meant to be.
So we walked about in the drizzle to stretch our legs and headed back to the boat (only after an ice cream of course) to get ready for a longer sail to Sag Harbor in the Hamptons the following day.
The sail to Sag Harbor was only memorial in that it was ugly - very windy with opposing tides creating choppy seas - we were being thrown about all over the place. But we stonked along and arrived that afternoon to the Peconic, a large body of water protected on three sides by a north and south fork and the main body of Long Island. We anchored in Sag Harbor one of the many villages and hamlets that make up East and South Hampton.
Our friends Shane and MV on sv Gem make this their home away from home and have been happy to show us around. From an outsiders point of view its hard to remember all the names and the villages and hamets like Sagaponac and Quogue but I can tell you its all very exclusive and expensive and gorgeous. Even the small properties are stunning and the larger ones almost obscene. The summer attracts the hoi polloi in their masses, to be seen in the fancy restaurants and bistros, shop in the boutiques and hangout on the mega yachts by the waterfront. Sim and I did our best to blend in but some how we lack a certain j'ai ne suis quoi that stands us apart from the 'high society'. That said we had a great time. There are affordable places to eat like 'The Corner Bar' in Sag Harbor and 'The Clam Bar', in Mantauk and the morish $5 margaritas at La Supericas. We did well, thanks to Shane and MV and had a winderful time.
Shane and MV drove us around the entire neighbourhood over a couple of days showing us the sights, the beaches and the magnificent properties all nestled around small villages and set against the lush and flowering country side.
Sim and I took Wandering Star over to Shelter Bay - a 27sq mile island in the Peconic Bay to anchor in some clearer water and walk more beaches. We did a little house keeping on WS and removed the awful orange beard she had been sporting since sailing in the murky US waters.
We had a final day with Shane and MV- who have showed us a great time but more than anything its been great just to hangout with them. We had a 5am start as we made our way back via Port Jefferson to Port Washington and eventually points further south. 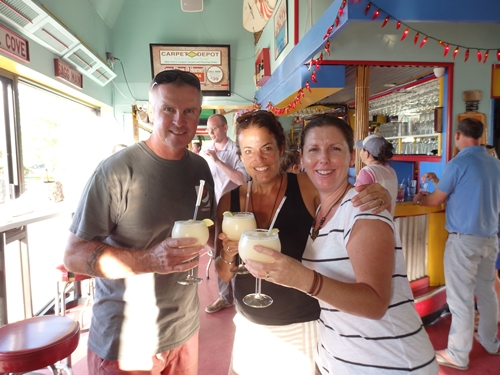 Margarita Monday with Shane and MV Ali and the swan hissing at each other! 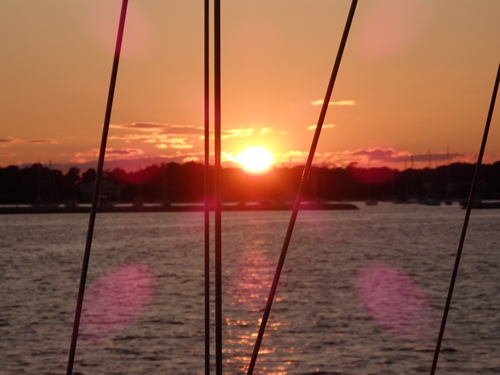 Sunset in Sag Harbor, The Hamptons 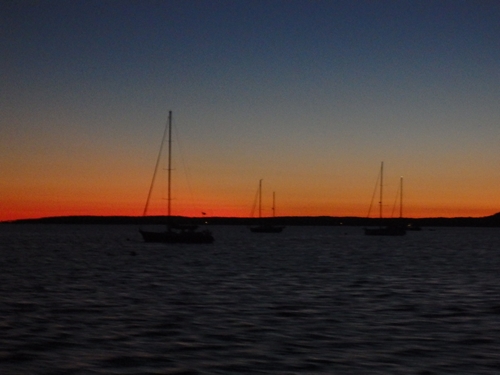 Our 5am start to leave Sag Harbor

Posted by Wandering Star at 9:24 AM