We've Been Bugged! - The ICW North Carolina to Virgina

Sim was pleased we had found a lovely anchorage, tucked up close to land to avoid any chop from the sea. It had been fairly windy but this spot was quite protected from the prevailing wind. There was nothing or no one around us for what seemed like miles. As I got into bed that night I could hear a loud buzz like static on a radio or a far off engine. I asked Sim what the noise was and after poking his head out of the cockpit door said it was the hum of insects. "Eww" I thought. As I lay in bed reading I could see outside our screened window a few bugs landing on the dinghy and mosquito mesh. We were obviously not alone!
But nothing could prepare us for what we found the next day. I got up, opened the companion way door and instantly shut it again. Outside in the cockpit was a scene you wouldn't believe. The entire bimini was covered in what looked like mosquito's, it was thick with them. They were buzzing around and seemed to fill the entire aft end of our boat.
It was the morning we had a really long day in front of us and needed the early start to cover the miles to the next anchorage. But we could see that we weren't going anywhere soon.
"No problem" I said feeling brave. I'll go out there and spray them with bug spray and shoo them all away. So dressed in leggings and a long sleeve top with a mosquito net wrapped around my head and 50% deet on and a fly swat in my hand, I went out to battle the bugs. I sprayed and swatted and swatted and sprayed but all I succeeded in doing was driving the critters into a flying frenzy - the noise they made was deafening. I was so overwhelmed by the futility of the task I admitted defeat and climbed back inside the boat.
Next up - Sim. We swapped clothes - he was quite a sight in my leggings and tucked in t-shirt with mosquito netting wrapped around his head...superhero Sim - the caped crusader.
He attached the long hose to our seawater deck pump and hosed the entire boat down with muddy river water. It was carnage. The deck was black with mosquito mush. The dinghy and everything in it was full of dead knats.
By now we realized these were not the biting kind, thank goodness! They are harmless enough....except for the greeny blue poop they left behind that stained the boat. Clothes, covers, headling and our white painted hull are all covered in tiny blue spots.


It took half a day of continuous hosing to exterminate the swarm. They would just fly around and re-land. I later learned that they die off after a few days but I don't think we could have waited that long. When we felt that we had reduced the numbers enough to get under way, Sim drove and navigated up the narrow ICW while I continued operation 'clean up'.  Its been an on going task ever since.
Eventually after another long day we made it to the free dock at Great Bridge,Virginia. That night it rained and cleaned our decks with fresh water. There are just a few stragglers left now. Tomorrow we move up through the lock and on up to Norfolk, Virginia and the mouth of the Chesapeake Bay where we will wait for a weather window for an outside sail up to New York. 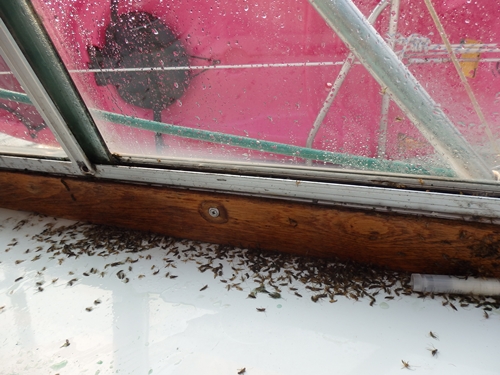 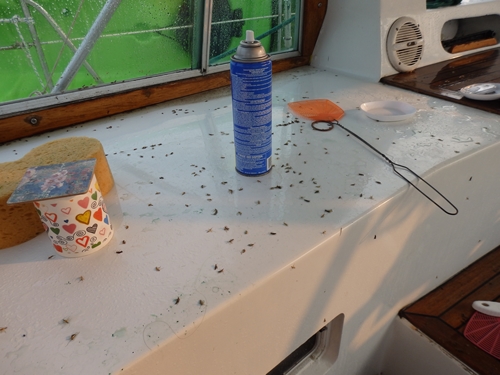 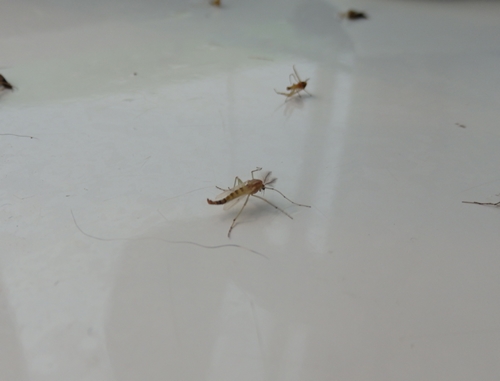 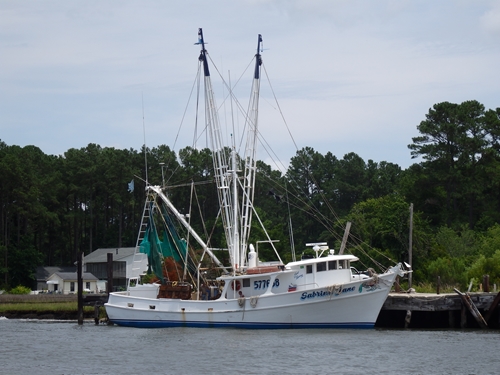 Shrimp boats are a familiar sight on the ICW 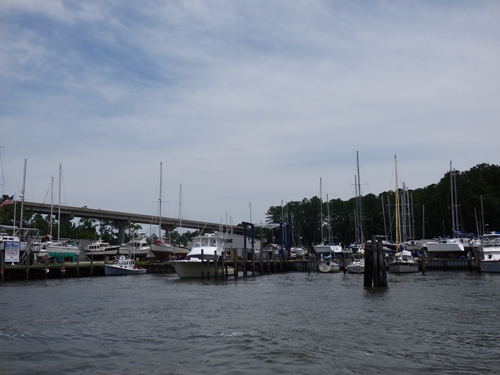 We passed Bock Marine - our favourite boat yard...who we'll be paying a
visit to on the way south. 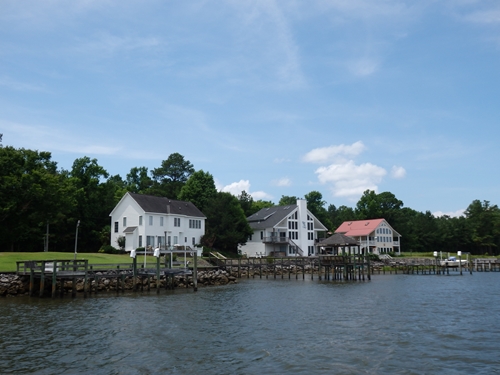 The intra-coastal waterway (ICW) has lots of nice looking properties
lining its banks. 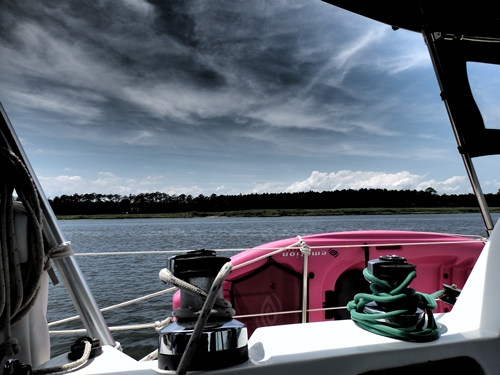 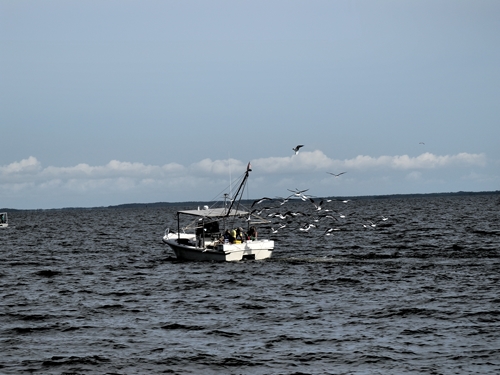 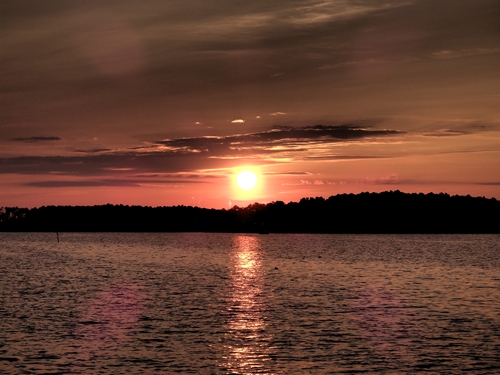 Motoring days on end might be a little boring at times but it has its moments. 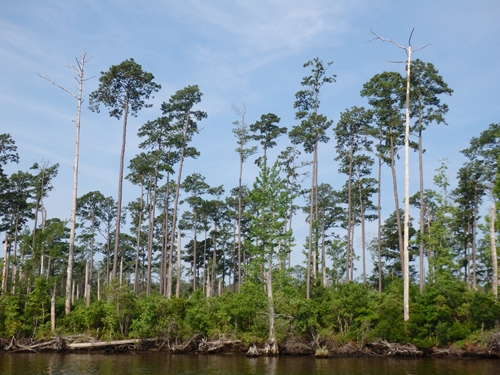 In rural areas only trees line the banks. 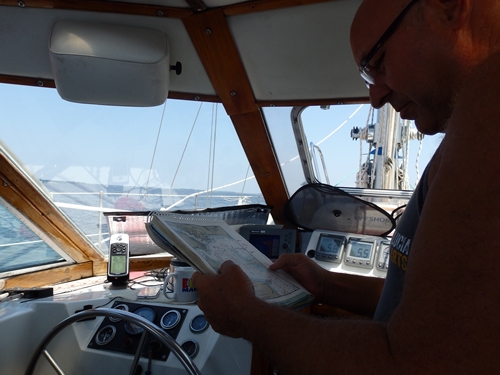 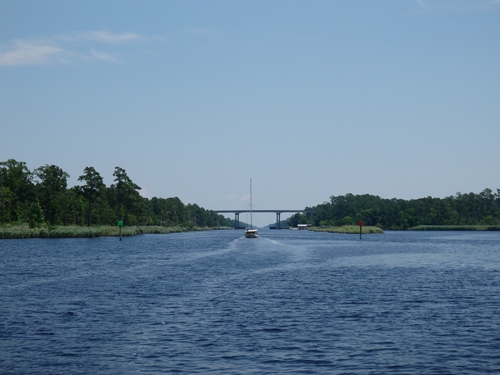 Another bridge to pass under. 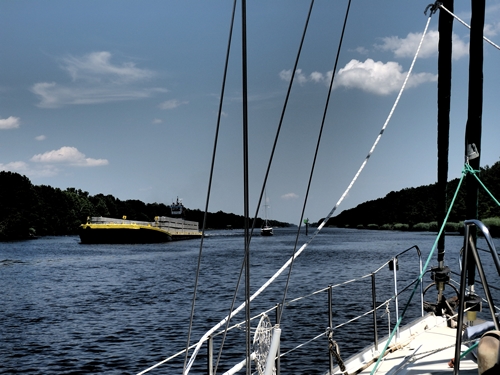 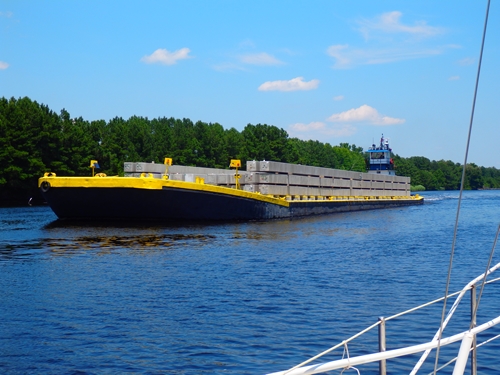 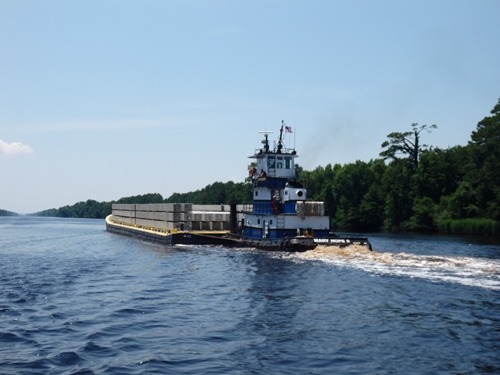 We are glad  to see the back of that tug and barge. 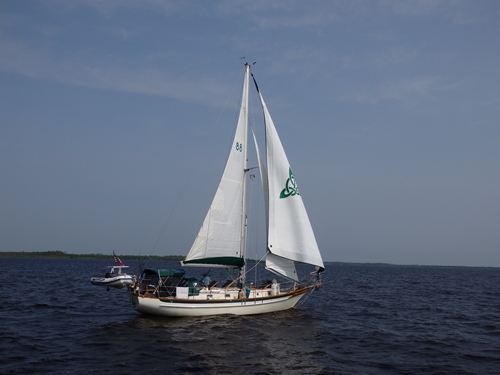 Calisto...a boat we sailed and chatted with on the radio for a couple of days 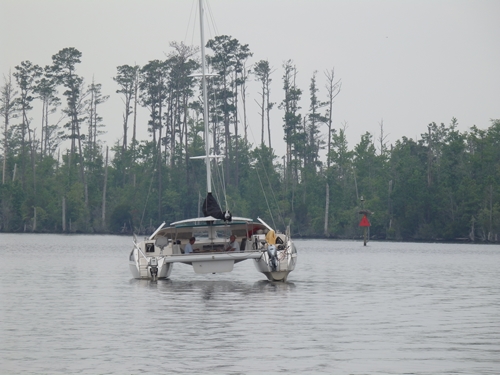 And this is what happens when you veer from the channel....its not as
deep as it looks - see one hull is out of the water! 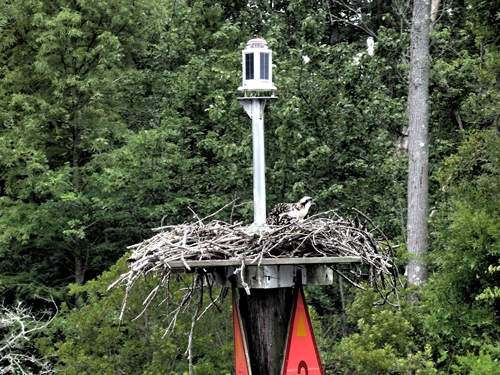 On every ICW marker is an Ospreys nest.