Blue Holes and Caves in Eleuthera

We left the Exuma chain and sailed NE to the outer island of Eleuthera. It felt good to be setting off on our own again to explore new places that we had not been to before. Eleuthera is a long, thin, curved island. In the southern half not a lot happens.  The small towns are quiet and sleepy.  There are a few gorgeous beaches but some of them take a little hiking (or hitch hiking) to get to.  What there does seem to be is an abundance of Blue Holes – deep pockets of seawater either on land or in shallow areas - and plenty of caves. 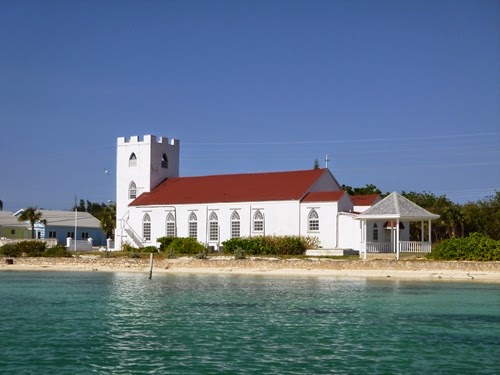 In Rock Sound we anchored near the church within the huge bay, apparently not a bad place to be if a front comes through as long as you move your boat accordingly for the best protection. We explored the nearby caves and small blue holes off the shoreline by dinghy and chatted with friends we had not seen since the East Caribbean.

The highlight of Rock Sound was the inland Blue Hole just on the outskirts of town.  A 100 meter pond fed from the sea is filled with an abundance of tropical fish all waiting to be fed by tourists.  The fish put on quite a show.  If you decide to go for a swim make sure someone stays with your belongings as we heard some cruisers got their wallets stolen.
From there we hitched a ride to the windward side of the island to the fabulous beaches at Northside for me to get my beach fix. As we didn't see another car for the return journey  we walked back sweltering in the glaring sun. The only other interest to us was the small American style supermarket just to the north of town. We hadn't seen a food shop in three weeks and supplies on board were starting to run low so this was a welcome stop. 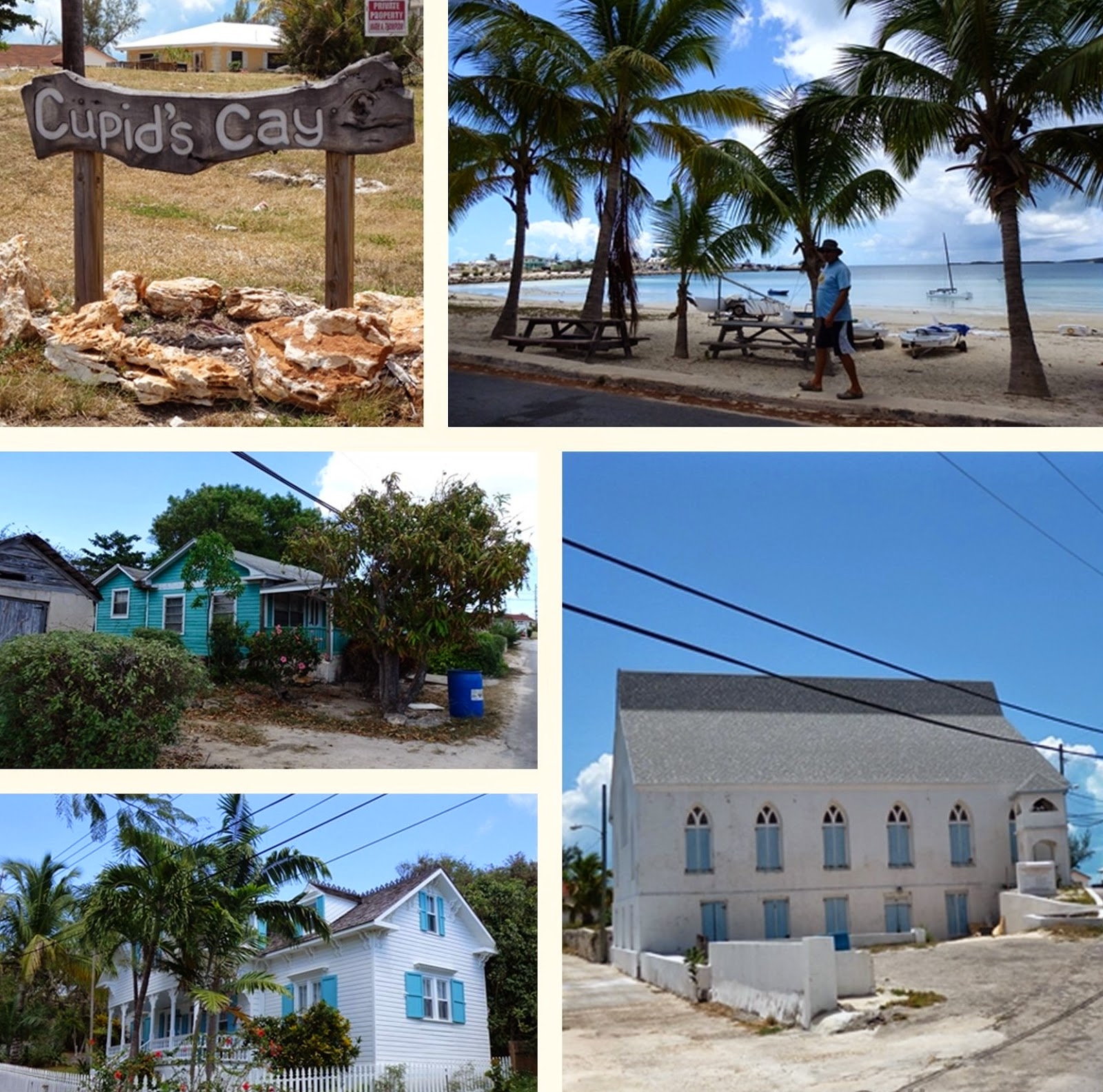 The lower part of the bay is filled with ramshackle buildings, liquor stores and a couple of supermarkets while the more prominent homes sit on the hill. It’s nice to see all the tropical trees and flowers thrive here after so much dry scrub on other islands -mango and flamboyant trees, hibiscus and bougainvillea.

Hatchet Bay was our next stop. A narrow entrance blown through rocks leads into a well protected lagoon.

The bay is filled with mangrove jellyfish that lie on the bottom of the seabed getting churned up when our anchor chain dragged across them. In fact the bay was filled with moon jellyfish as well so Sim and I stayed out of the murky water! 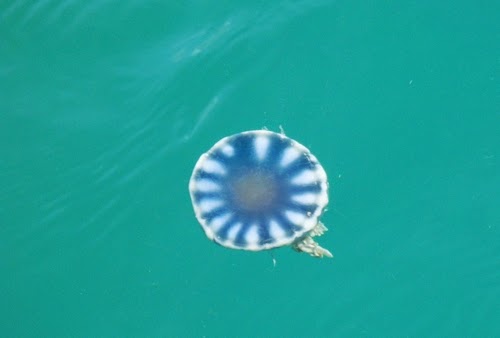 Alice town (if you can call it a town) is nestled along the southern part of Hatchet Bay.  It is run down and scruffy but it is also vibrant and colourful with pink, purple and blue homes dotted amongst the mango and coconut trees. There is a pretty beach on the southern side of town but very little else seems to be going on.
The reason we were there was to explore the Hatchet Bay Caves just three miles north of town that our friends on Spirit of Argo had raved about when they passed through last year.  We hitched a ride there and walked down the red dirt track to the entrance.  You are totally on your own here – there is no charge and no guide to take you down.  We knew from our friend’s blog that we needed torches, clothes that could get wet and preferably a waterproof camera.
As Sim led us down into the bowels of the earth we passed signs that said “welcome to hell” – a sure fire way to put the fear of life into a girl! Thank goodness I didn’t read the bit about it being a Lucayan burial ground or my imagination would have been in overdrive. It was sad to see all the rubbish and trash left about the place....it most certainly is not being looked after, which is a shame.

Inside the caverns are stalactites and stalagmites reaching from floor to ceiling creating a cathedral like appearance, if a little dingy. The caves were cool – a welcome relief to the long hot days we have been having. Ladders have been put in place to take you down to the next levels. Our friend’s blog had said it was easy not to get lost as you just follow the string someone had kindly left in place.  But the string was broken and we would often have to hunt to find the next end.  Though Sim seem to think that all the turns we were taking were always to the right.  As we descended deeper you couldn't help but notice all the graffiti on the walls.  Some dating back to the 1800’s – it was eerie to think of people here over 100 years ago.
Another ladder led down into subterranean caves half filled with water. This is really not my idea of fun but Sim wanted to explore and the choice was to be left on my own (in the very dark with a fading torch) or to follow him in.  I stripped down to a bikini and wadded chest deep in water, in the dark, with only a torch for light – this is my idea of what being brave is about.  Luckily there seemed to be only one more chamber we could explore before we had to turn back.
With the worst of it over I actually started to enjoy our experience.  I’m not sure the caves would have been as impressive had we paid for the privilege and been shown around....but exploring by ourselves was an enjoyable adventure. 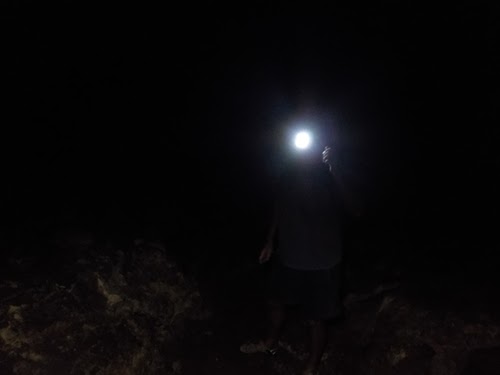 The flash on the camera has made it look like there was more light.
It was in fact pitch black with only the light from our torches. 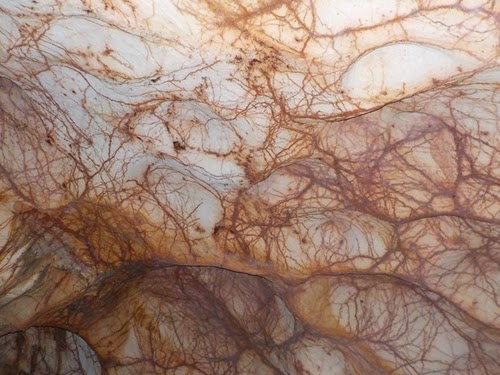 The ceilings had a more marbled effect the deeper we got 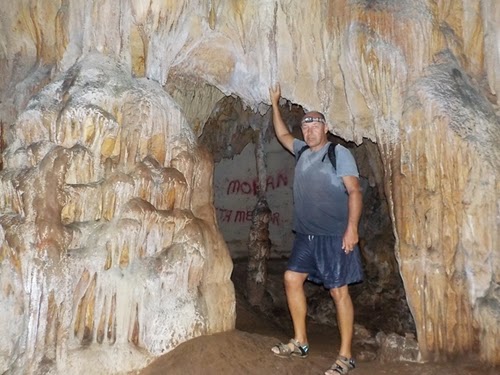 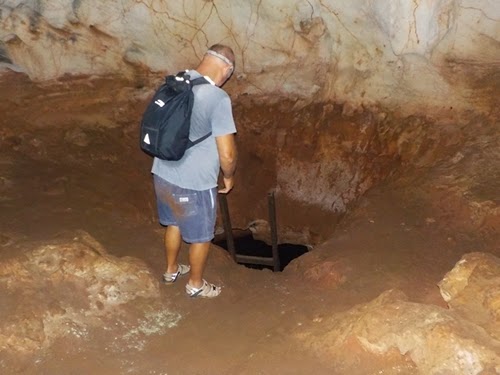 ]
The last ladder down to the water filled caves.