By The Skin Of Our Teeth

The last week has had us meandering down the icy waterways of the ICW.  Charleston was our next port of call on the journey south and turned into a gathering place for several boats that we knew.  And despite the wind, the cold and rain we managed to get together.  Only the South Africans would consider braai-ing (bbq) in sub zero conditions and enjoy themselves at the same time but we also had a fun evening on ‘Alleycat’ with the crews of ‘Khaya Moya’ and ‘Shiloh’, as we stood around the little heater in our cold weather gear.
Strong winds and plummeting temperatures were the focus of our stay in Charleston.  Though we did manage a girl’s day ashore with the female crew members including Kay from ‘Bad Bunny’ who we’d finally caught up with. Downtown Charleston is a mix of old and new with fine restaurants and little cafes, designer clothing stores and outdoor markets, churches with tall spires and grand old-style homes with verandas and portico's. I’m sure the town would have had a lot more southern charm on a sunny day when we weren't soaked in seawater from the boisterous dinghy ride ashore but we enjoyed a stroll about town taking in the markets and having a bite to eat.  But unless you are staying in a marina, which we weren't, the anchorage is a nightmare in anything other than settled conditions when strong wind over tide creates chaos and mayhem with careening boats bumping into each other and dragging anchors.  So although our stay was a little brief we were happy to move on.
We continued on in a flotilla of four for the next few days stopping to anchor in rivers for the night until we reached the next town.  Being the boat with the deepest draft we had a few hairy moments – (mainly for me –Sim was as calm as a Hindu cow!) in the Ashepoo- Coosaw canal and again as we took the ‘local’ shortcut into Broad Creek on Hilton Head Island. But we scrapped through by the skin of our teeth with just inches beneath the keel and always with a low tide so that if all failed we wouldn't have so far to fall!
Beautiful Beaufort (pronounced bewfort) is another Southern bell but one we only got to see by night as we were leaving the following day. Although we had a nice meal ashore at the cruiser friendly Luthers, where burgers were half price and drinks on happy hour, beware that they charge a big tax for groups of 8 or more.  The highlight though was the hot showers at the cozy Downtown Marina our first since leaving the boatyard. Washing on board at the moment is certainly not a joy!
We arrived in Hilton Head a couple of days ago, a holiday island in the shape of a foot not a head – go figure!  The island even has a colour scheme that residents and businesses must adhere to apparently to stop the place being overrun in ‘flashiness’ and in line with the natural beauty of the place. No garish pinks or Caribbean blues. And the place is full of trees: pine trees dropping cones, oak trees dripping in Spanish moss and palm trees waving in the wind, lining the coast, streets and squares. The two catamarans have sailed on to points south while we wait with Khaya Moya for some post of theirs to arrive.  We have taken advantage of the hot showers again and laundry (though not as nice as in Beaufort) and walked around the marina village known as Shelter Cove Marina.  Sim and I went a little crazy in a very nice supermarket with reasonable prices on specialty items we have not seen for a while. And were kindly taken ashore to a very cool bar, with $3 happy hour drinks and HUGE bar snacks – the kind of place we love, by one of John and Shirley’s friends who live here.


The weather has turned again – a warm (figuratively speaking – compared to what we have had) wind is blasting out of the south. The skies are bleak and it hasn’t stopped raining all day. It’s a day for staying put; but not much fun because our batteries are low with no sun to give them a boast, and the alternator isn't doing its job. Sim is investigating. The boat is damp from all the condensation and the varnish is peeling off in sheets from the window frames. I have been wondering what the plus points are to this cold weather sailing and all I can come up with, asides from giving my skin a break from years of harsh sun, and no longer sweating, is sleeping under a duvet and cuddles in bed!  And though part of me is craving a little sunshine and warmth I can’t deny that I like the snuggles that this cold weather brings. 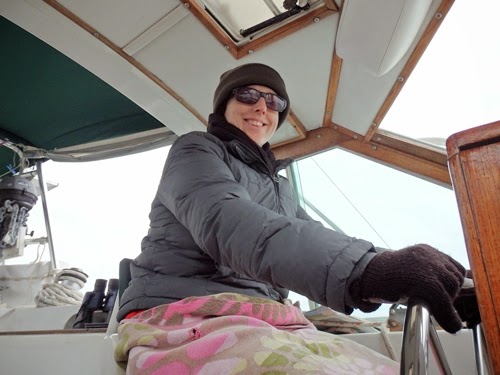 Its a cold job sitting at the helm all day. 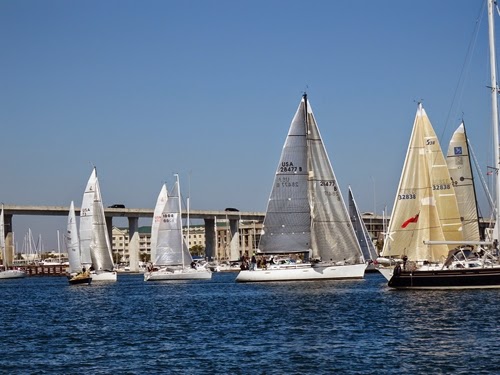 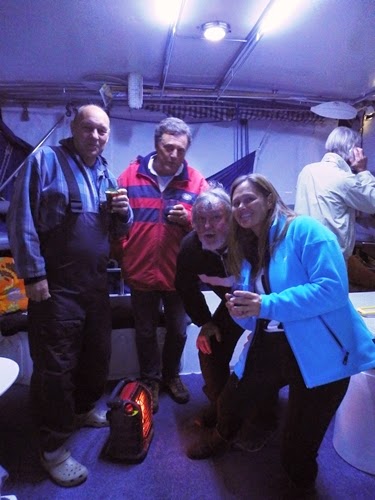 Huddled around the gas fire on Alleycat 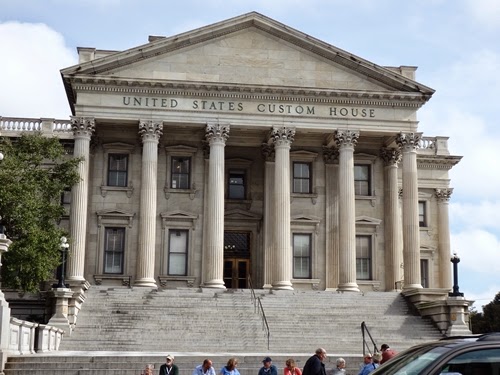 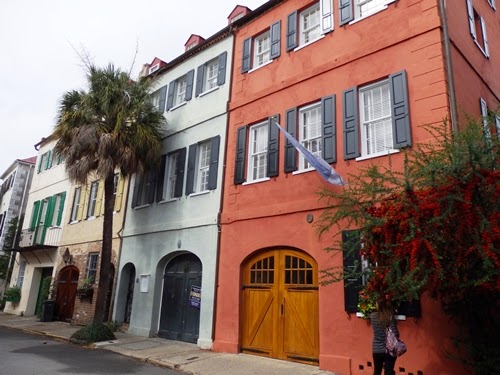 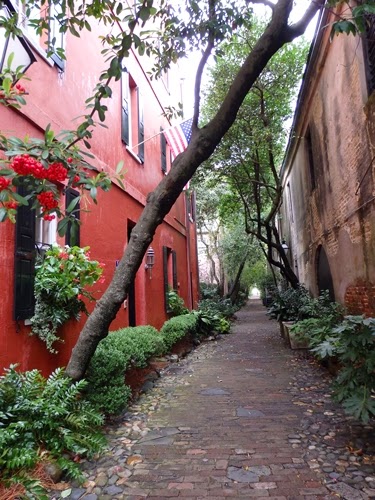 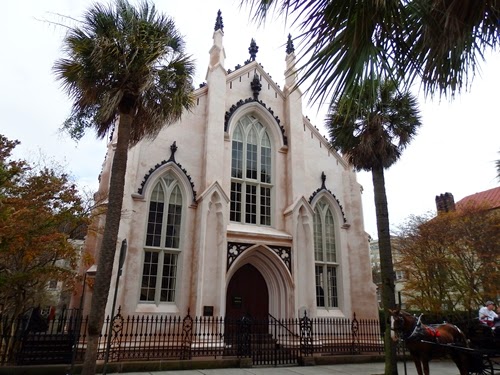 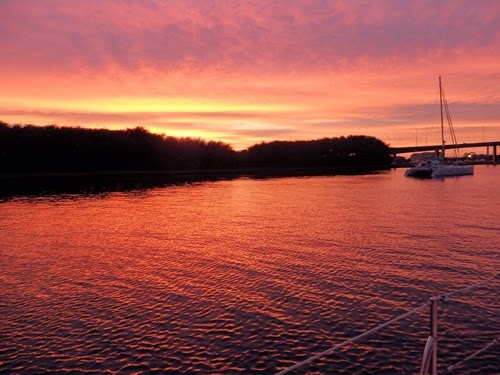 Pretty sunset before a night of chaos in the anchorage 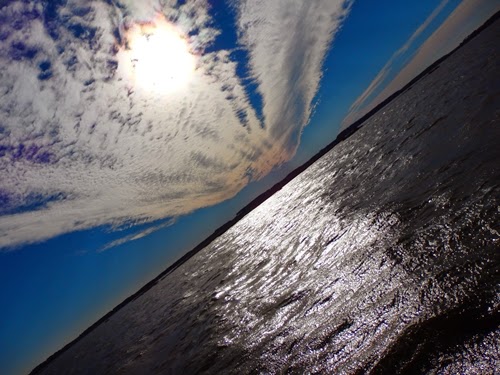 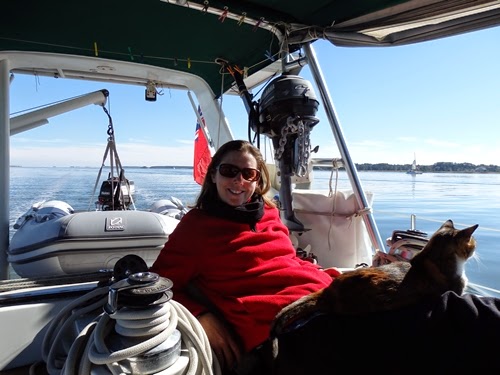 Basking in the sun on a bright, crisp day 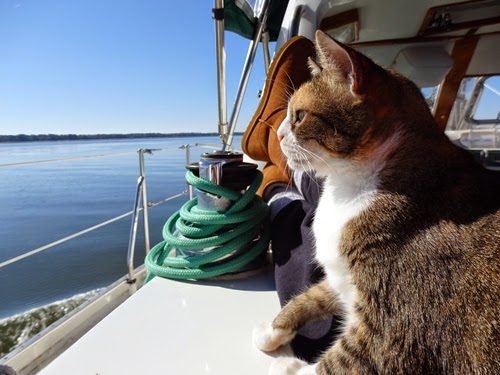 Something has caught grumpy's interest 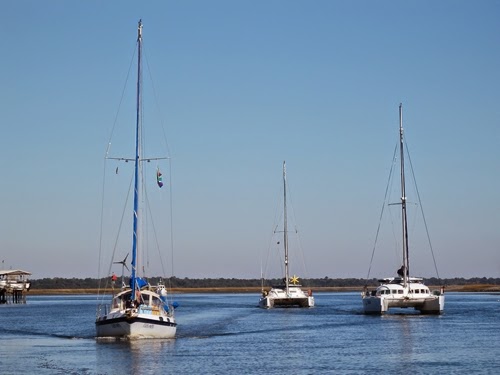 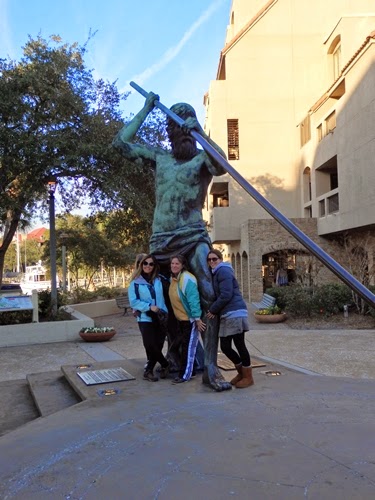 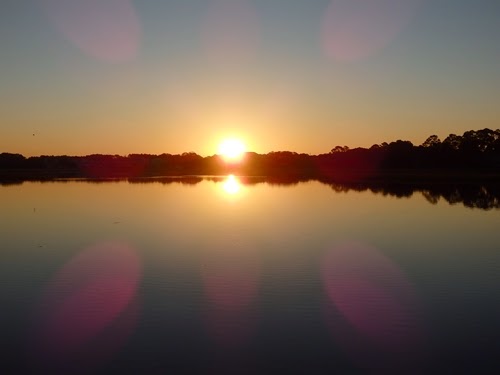 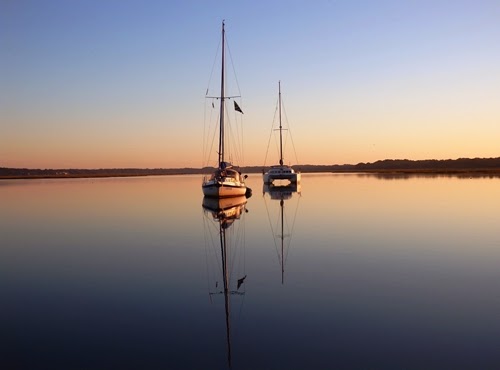 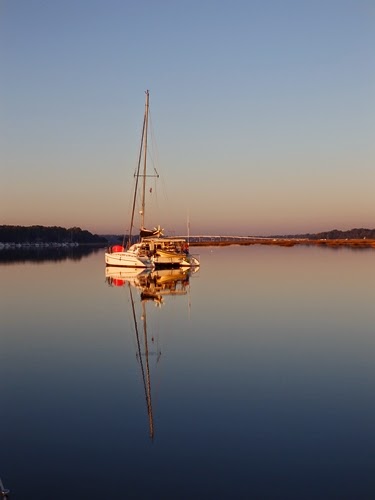