Should We Stay Or Should We Go Now

"Should I stay or should I go now?
If I stay there will be trouble,
and if I go there will be double.
So come on and let me know."
- has been the hot topic of conversation every morning as we tune in on the SSB (single side band radio) to listen to Chris Parker and his daily weather reports.  We are only 120nm away from our entry point into the USA.  But the weather has not been playing fair. There has been NO WIND what so ever and although we could motor all the way, this is only a last resort option for us to get us out of trouble should any bad weather be heading this way......which looked like a serious possibility over the last few days.  With words like - ”tropical Low, tropical storm or gale force winds” – coupled with “too many influences to predict what will happen” we have literally been looking out the window each day to see what the weather will bring and honing our plans should we be stuck in the Bahamas in storm conditions.
The Berry Islands offer very little all round protection especially for boats like us with a 6ft draft.  We sat in Frozen Cay for a couple of days but as it’s a private island we could not step  ashore, a swell rolled in from the cuts between the islands and Wandering Star rolled and bucked as the seas smacked against her metal hull resonating like a steel drum (only a little less tuneful!).  We made arrangements with Khaya Moya to meet at the north of Hoffman’s Cay so we could go and explore the landlocked blue hole.  For slightly shallower boats south Hoffman’s Cay and surrounding islands have a lot to offer but we literally had just inches under the keel, re-anchoring three times so we didn’t swing into the shallows.  In the end we put our FX55 Fortress anchor out as a stern anchor which proved its holding power when we struggled to lift it the following day.  Swimming over to Khaya Moya that afternoon to greet them, Sim and I got the shock of our lives (no understatement there) when a 1ft shark sucker first attached to Sims back and then to my tummy! Although I’m sure for some, this is not a big deal.  To me it was horrifying. John and Shirley looked on in amazement as Sim and I thrashed about trying to get it off us.  I legged it back to our boat while Sim got out on Khaya Moya.  We both refused to get back in the water.  We stayed at Hoffman’s Cay long enough to go and visit the blue hole by dinghy, about a mile and a half run from the north.  Land the dinghy on the first beach after the mangrove inlet – there is a trail that leads from the south end of the beach, at the fork; take the left for the blue hole or the right to take you to a beach further south.   The hole is completely surrounded by land but must be fed from underwater caves as it tasted salty.  Another trail leads down around under the ledge to the water’s edge and the eroded rock walls.  Shirley and I were brave enough to swim in the warm waters, despite the legend of a giant solitary grouper lurking at the bottom.
Having been put off from swimming in Hoffmans Cay we lifted anchor (not an easy feat with the buried Fortress) and moved a mile north to the idyllic Soldiers Cay.  If there is one benefit to little wind – it’s being able to anchor in places that would otherwise be unsafe or at least uncomfortable.  Soldier Cay was perfect – a tiny little island that you could hop, skip and jump over in a jiffy to the windward side.  We anchored in soft sand literally covered in hundreds of sea gophers – an inflated sand dollar. It was the perfect place for an afternoon beach bbq. We had a couple of fabulous days there beach combing, snorkelling and just chilling with our friends, playing rambunctious games of farkall – a dice game.
But with the possibility of bad weather we needed to start looking at what options there were for us.  So we decided to check out the marina at Great Harbour Cay 25 miles away and another motor-sail.  We passed several very impressive waterspouts, passed an island owned by a cruise ship line and turned into Great Harbour Cay.  The beautiful blue waters now turned to green – the soft white sand now full of weed.  We checked out the marina with not one other sail boat in sight, instead filled with motor trawlers and sport fishers.  But the marina staff were very friendly, they had room, their docks were secure, the marina incredibly protected from the sea, their price at $1/ft far more affordable than the expensive Chubb Cay at over $4/ft.  It would be fine if we needed it – any port in a storm and all that.  We caught a ride over to the Beach Bar on the other side of the island and enjoyed a cold Kalik beer with free conch bites at happy hour taking in the colourful surroundings.  The mile and a half walk back not seeming so bad with our full tummies and the heat of the day gone.
Should we stay or should we go now?  There is still no wind, though as the days go by the threat of anything tropical for now gets less.  But hurricane season has officially started and we need to get moving with still over 1000 miles to go. 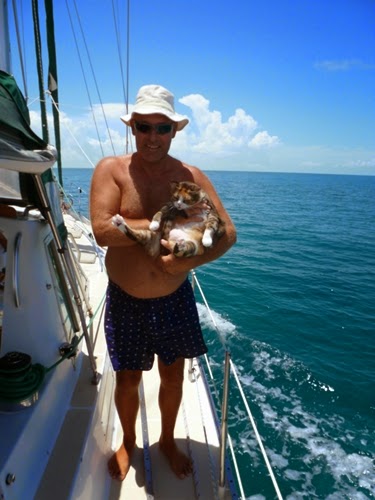 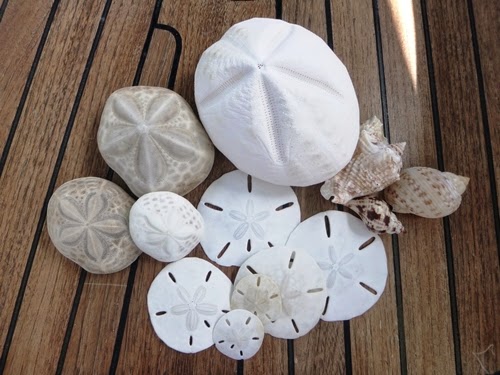 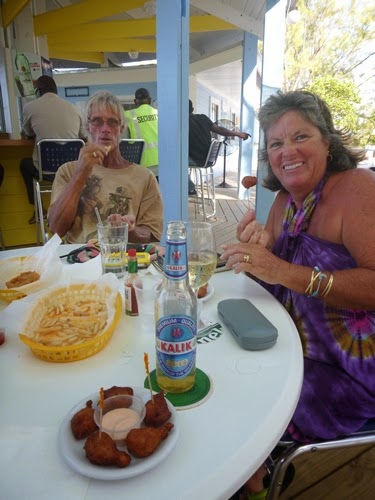 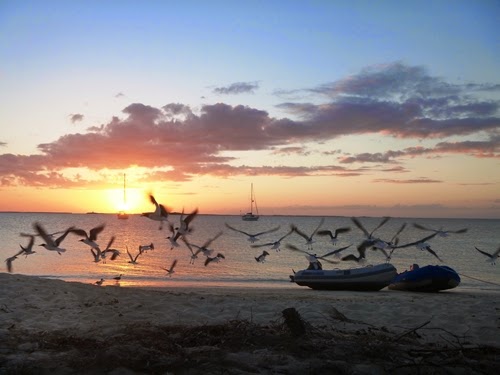 Surrounded by Seagulls at Soldiers Cay 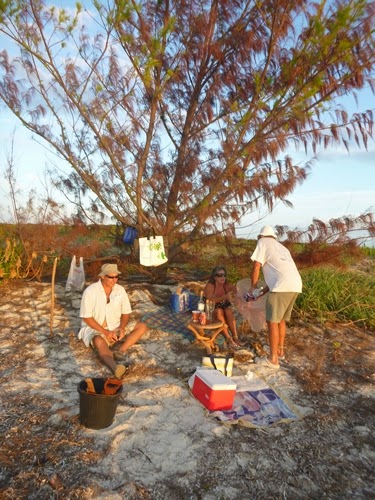 Enjoying our day at the beach 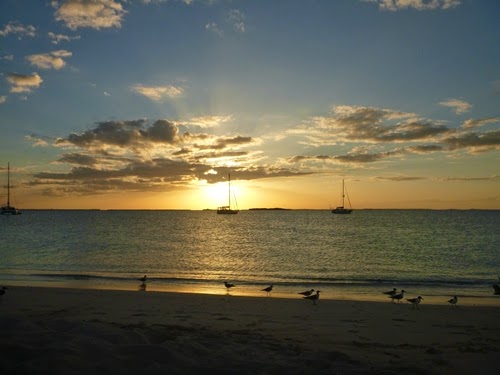 Another hard day at the office! 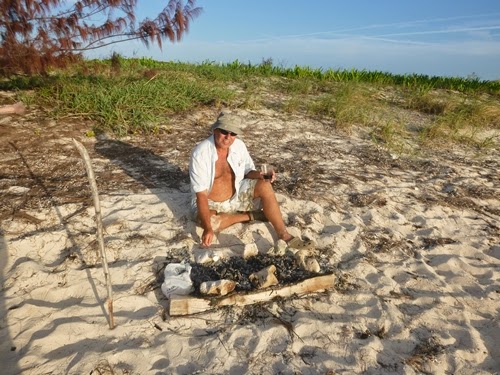 Sim toasts a marshmallow for me 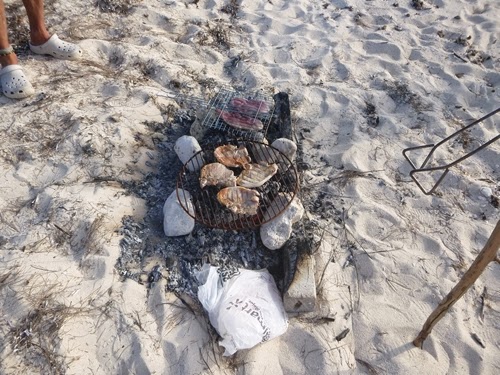 The beach BBQ - with a lot of pork chops! 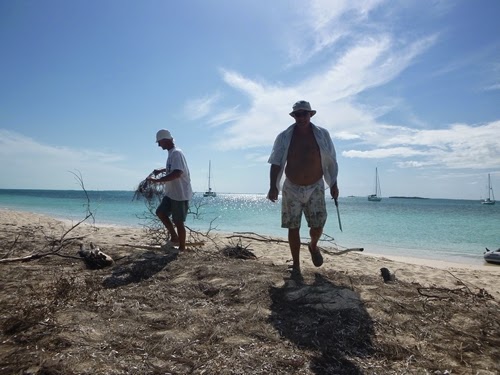 Sim with his machete chopping wood for the fire 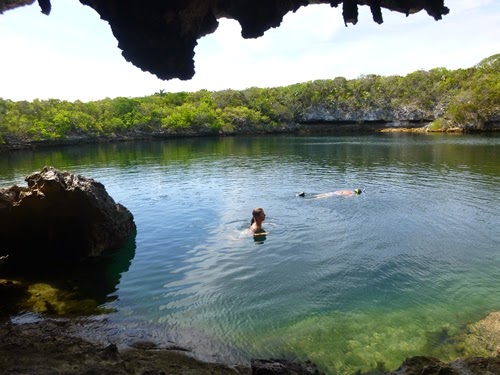 Swimming in the blue hole at Hoffmans Cay 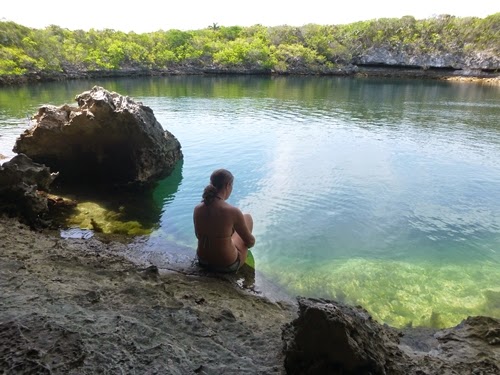 Contemplating the hole before I jump in! 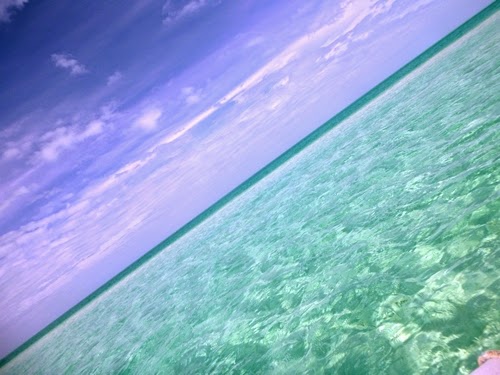 Goodbye blues - won't be seeing you for a while