Sim does not like Nassau very much; he has never liked Nassau from the days when we were there five years ago.  The strong currents, heavy waterway traffic and high crime rate make this an unattractive spot for him.  But for me this tiny metropolis is a fun and interesting place to hangout for a while.  It’s a world away from the uninhabited islands we had been cruising through where one island tends to look like another. Not that that is a complaint but variety is the spice of life after all.  There is no confusing Nassau with anywhere else.  The looming towers of Atlantis can be seen from miles away, the twin bridges that cross over from New Providence to Paradise Island, the fishing boats and mail boats, not forgetting the ubiquitous cruise ships that arrive daily, often four tied up to the docks at any one time make Nassau a very distinctive place.

There are a few anchorages in the harbour, the main one being just west of the bridges on the main land side.  But we don’t like it there having been aground there once before we prefer to anchor just off Paradise Island by the Yoga Retreat.  We can drop the hook in a sandy spot and feel a little more comfortable as the tides pull you daily both east and west.  But as it is right next to the channel we are plagued with wake and speeding boats from dawn until late at night – party boats blaring loud music pass within inches as we are climbing into bed at night!  We have got into the habit of leaving a lot of lights on so we can be seen.


Gone is the dock by the Green Parrot where we could leave our dinghy for free and fill up our water jugs from the tap across the road.  Although the tap is still there and in theory you can still get water, the expanded marina now charges $5 to leave your dinghy.; the only safe spot on that side of the bridge.  We paid our dues and took a stroll downtown.  The area is a hub of activity with designer clothes shops, souvenir shops, duty free shops all aiming at the cruise ship crowd. But Nassau is also steeped in history from swash buckling pirates to colonialism.  We took in a few of the sights at Parliament Square, Christ Church Cathedral, Pompey Square and the straw market with its overpriced imported goods.  Before I had totally worn Sim out we climbed the 66 (now 65) steps known as the Queens Staircase that were cut into a limestone hill and bricked by slaves; the cut a shady oasis on an otherwise blistering hot day.  At the top you will find the water tower supplying the city’s water and the 18th century Fort Fincastle built in the shape of a boat by Lord Dunmore in 1793.  Worn out from the sun and the exercise we staggered back to the boat and later had sundowners on Khaya Moya with the crew of Wild Blue.
Of course a trip would not be complete if we did not visit the gaudy but impressive Atlantis resort owned by the billionaire tycoon Sol Kerzner where the exorbitant prices can ruin a good vacation.  The dinghy can be tied up at a small dock at the end of the marina to the right just in front of the dock-masters office.  You can walk around the grounds for free, like the marina village and the casino and if you wait until 5 or 6pm you might be able to walk through the aquarium tunnels like we did for free.
On our last day in Nassau we took our laundry to the very reasonably priced Poop Deck (possibly Nassau Yacht Haven) $4 DIY wash and dry, they also have a book swap. We left the dinghy for free while we strolled passed the marine shops down to Harbour Bay Shopping centre with a supermarket, liquor store, bookshop, coffee shop with wifi and a radio shack amongst other things.  The supermarket is lovely but expensive – the rum as cheap as $8.85. Later that afternoon Shirley and I beach combed our hearts out on Paradise beach – a great place for sea glass and shells.  Sim and I decided to move on having had our fill of Nassau and left the next day for the Berry Islands and a frustrating day of motor sailing as squalls blew up one minute then sucked the wind away the next. 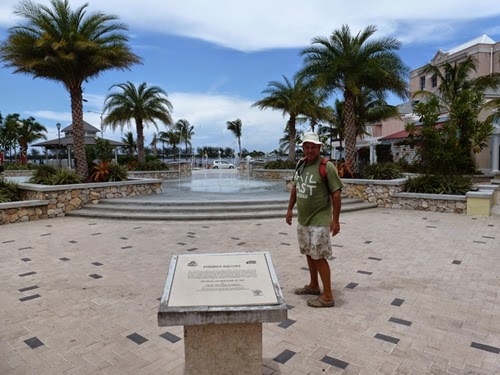 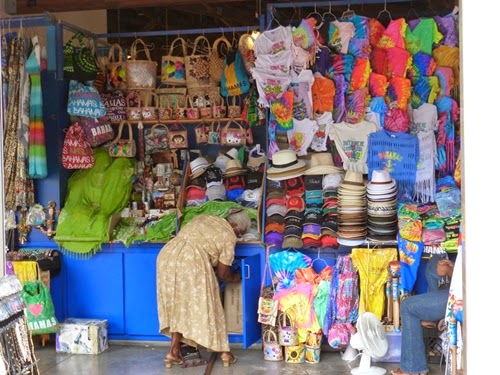 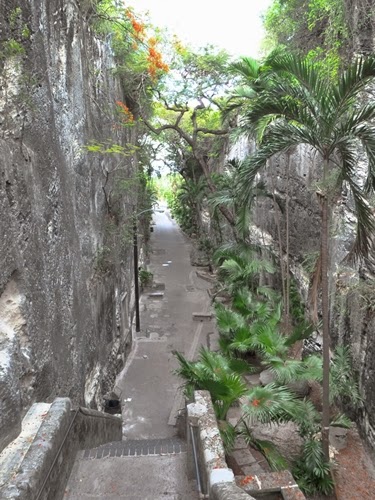 Looking down the Queens staircase 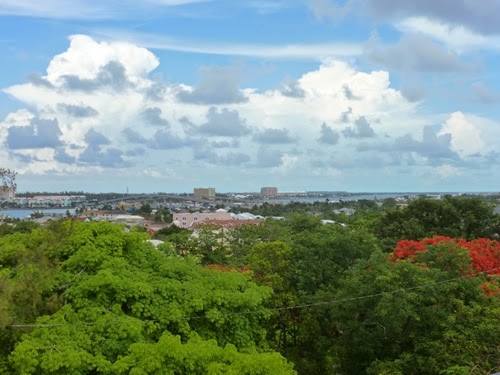 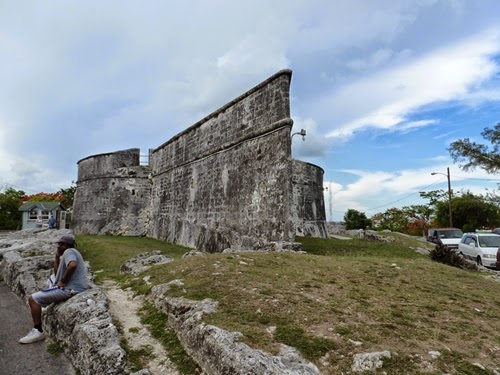 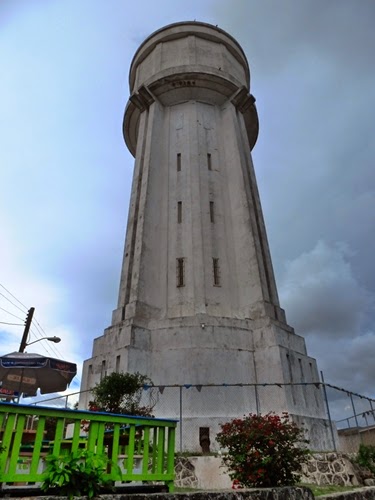 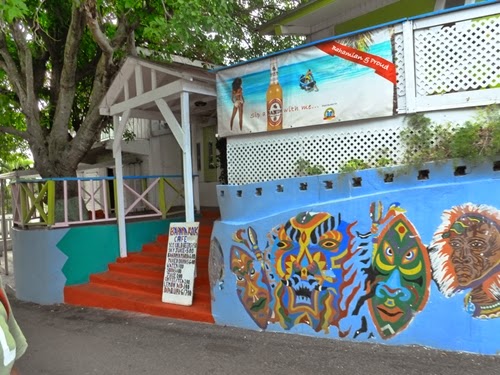 Bar at the top of the hill 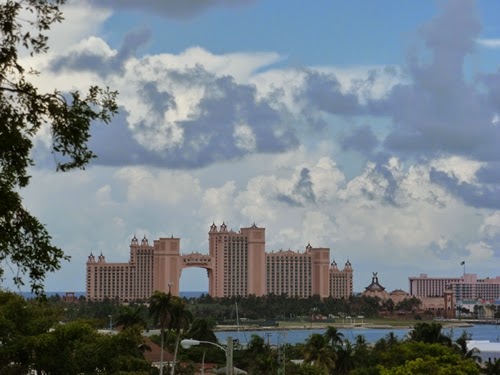 Views out Atlantis and Paradise Island 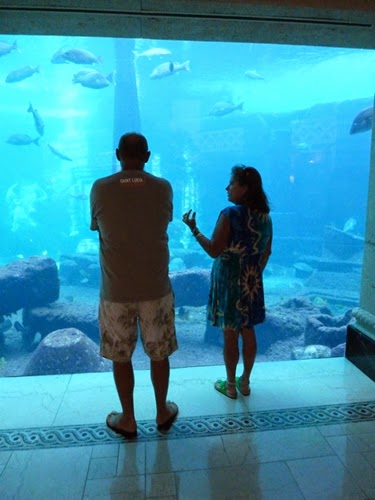 Sim and Shirley at the aqurium 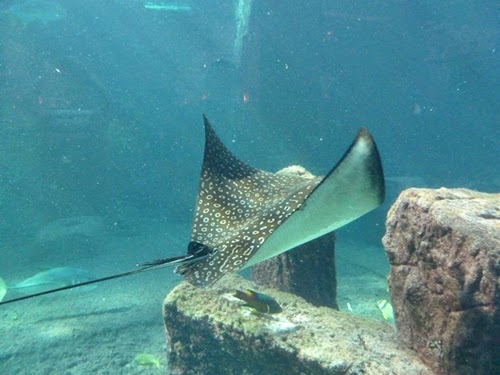 spotted eagle ray at the aquarium 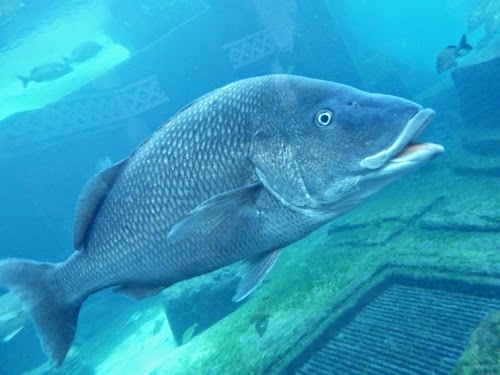 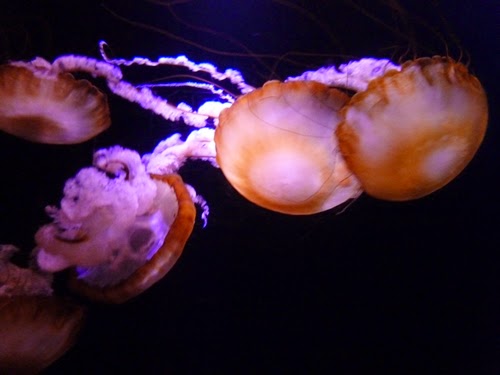 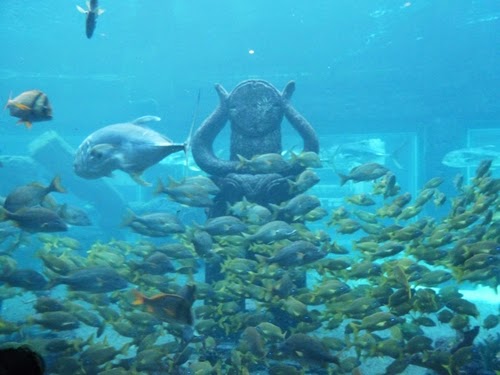 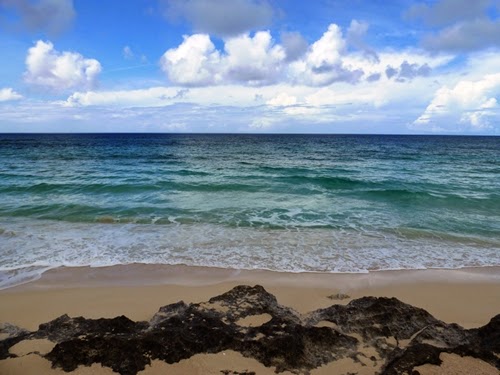 Paradise Beach is a great for beach combing, leave dinghy on beach  opposite cruise ship dock or at  the yoga retreat 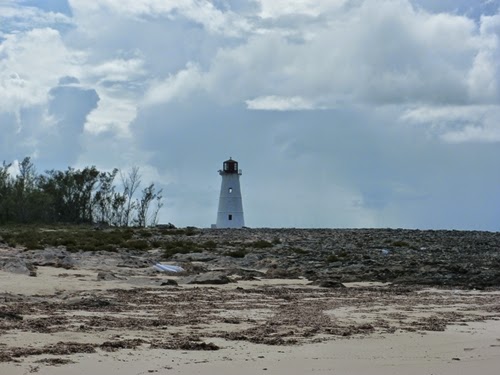 The lighthouse at the end of Paradise beach