We are still Anchored between and the mainland.  The water is not quite as murky as in the rest of .  We can run the watermaker to top up our drinking water and enjoy the cool breeze as it blows unhindered across the bay.  That is when the wind does blow.  The weather has been incredibly settled and although we are not complaining – we suffer in the heat.  Bodies constantly drenched in sweat.  Poor Sim suffers the most, his skin exploding in heat rash from working outside in the glaring sun.
Jobs are being slowly ticked off the list.
*The turnbuckle has been replaced.  The furler unit put back together and the newer, although slightly smaller genoa put up instead of the original which is in need of some repair.
*The inner staysail has been repaired
*The beautiful cockpit floor and seats have been cleaned and re-oiled.
*Sim has added a sea water wash down to the anchor locker to wash the chain as it brings up mud from the seabottom – a very useful item in these clay/mud bottomed bays.
*The Air X Marine wind generator has been taken down and is in pieces as Sim works out what is wrong with it.
We swot up in earnest all there is to know about steel boats to try and understand the best maintenance procedures, electrolysis, galvanic corrosion, stray currents, mill scale and rust, rust, rust.  We want to take care of our lovely home. We have noticed some blistering of paint on both sides of the aft end of the boat at the waterline in the top coat paint, not the antifouling. Sim has made a silver cell test lead devised with an amp meter, a piece of silver.  The silver is attached to one probe and dangled in the water and the other probe is attached to the metal in question. It provides a reference voltage to allow you to measure the voltage of suspect metal.  Less voltage than 0.6 volts and the zincs or anodes that protect your boat are not working causing your boat to erode.  More than .85 volts and you are over protected causing the paint to blister. Only our readings suggest opposite to our findings. As always we play the two step. Two steps forward and one step back. Maybe our silver isn’t quite as pure as we thought; a conundrum yet to be solved.
But as always it’s not all work.  Last weekend we went to a dinghy concert held in .  An old barge was placed in the middle of the bay to hold the band where cruisers could rock up in their dinghies each tying to the boat in front.  A floating bar was attached to the side of the barge.  We rafted up along side Spirit of Argo and Darling Blue sipping on sundowners whiling the afternoon away until the sun set and we all went home.
On Sunday we visited in the morning for the monthly flea market.  Not many people were there so it wasn’t a huge success but we did manage to sell enough to cover a few drinks on our next night out.  That afternoon it was back to and Rogers Beach bar catching up with friends and seeing out the end of another week. 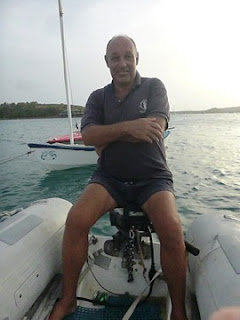 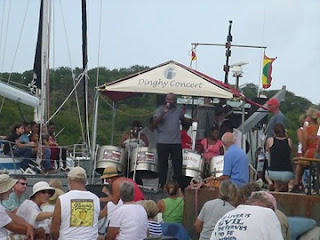 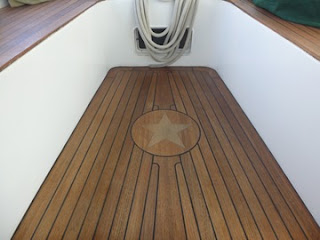